How to End Procrastination Forever

I had a HUGE revelation this week after reading an awesome post by David Cain at Raptitude about procrastination vs. laziness. I’ve struggled with procrastination most of my life, like many people. I’ve even accepted the fact that I procrastinate. But until I read David’s post did I really understand why I do it.

There’s a deep-rooted psychological issue happening behind-the-scenes in my brain. I can’t control it. But… now that I know why  I do it, I can cope with it. I suggest reading David’s post… it’s outstanding, but to sum it up, many people fear that they will not be perfect at something and therefore don’t commit to starting or even finishing it. David explains it way better than I ever could.

What’s important is it hit home for me and I’m now addressing the problem. Here’s my solution…

Yesterday I closed the laptop, pulled out my moleskin notebook, grabbed a pen and created an “I Will” list. I got the idea from watching a recent episode of NCIS. It’s one of my favorite shows, call me a nerd if you want… it’s okay, my wife does. But… you never know where you’re gonna get your next great idea!

Anyway… the “I Will list” is really just a brief list of things you want to accomplish. The title of the list is, obviously… “I Will…” and you list the things “you will do”. There’s just something inexplicably powerful about writing down your goals that turns your subconscious mind on. It’s almost as if you’re programming your mind and telling it what you want it to do.

But just writing the “I Will List” is not enough. You gotta be able to figure out how you’re gonna achieve those goals. How will you increase the revenue of your business to $8,600 a month… by adding more products to inventory, running more paid ads online, building out your sales funnel with upsells, cross-sells and downsells? Figure out the how and document each one as a task underneath your overlying goal.

If you’re anything like me, this whole task of creating an “I Will List”, figuring out all of the tasks involved in making each goal happen is just daunting. I like to be organized. I like spreadsheets, neatly organized file systems and a clean desk. Trying to juggle of this stuff in my mind just won’t work and the moleskin notebook can only take me so far. I hate writing (like, physically… with a pen). I’m much faster typing than writing.

So, here’s how I organized my “I Will List” and all of the tasks that go along with it…

Lifetick is a web-based software that allows you to organize your goals, add tasks required to accomplish those goals and track them as needed. They don’t have an actual app for your iPhone/iPad but if you access their site from a mobile device, you’ll be shown a mobile optimized version of the web-based application.

So far, I’m pretty impressed with its functionality. I have everything I need with their free version. Here’s a screenshot of my goals inside Lifetick…

The screenshot below shows an expanded version of my goals with the required tasks below each one. Once you’ve accomplished each task you can go in and check it off the list. The ‘Progress’ column displays your overall progress for each goal as you accomplish the required tasks. 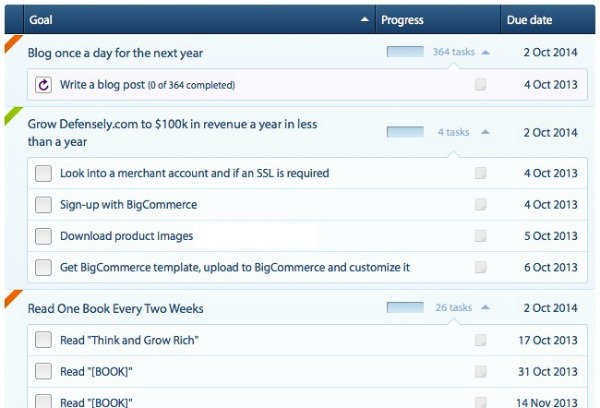 If I could give you just one piece of advice, it would be to quit making excuses for why your life is the way it is and start making descriptive goals to attain what you want. Every single person on this beautiful place we call Earth is living the life they made for themselves. What you have and don’t have is a direct result of what you’ve done or haven’t done.

Basically… if you don’t like what you got, quit your whining and get to work.

When you claim your FREE digital copy of my book by submitting the form above, you’ll be added to my email list where you’ll receive sporadic email newsletters and promotional offers from me. Your information is 100%. View my Privacy Policy.